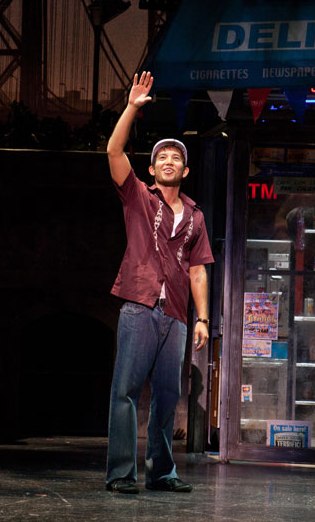 Watch out, the denizens are restless as they come out on to the streets in the vibrant and Latin-flavored musical In the Heights. The vibe of that namesake neighborhood of Washington Heights in uptown New York City was welcome in an energetic touring production that set up residence in Providence last week. Judging from the opening burst of a tuning radio playing snippets of merengue and salsa, you know you’re in for a nice visit.

The musical takes place in the predominantly Latino section of upper Manhattan around the 181st Street subway stop. Even though gringos are a minority in these parts, at heart, it is still a universally working-class American story as first-generation immigrants arrived to seek the dreams and ideals of a better life.

Originally written by the multi-talented Lin-Manuel Miranda during his college days at Wesleyan University, his show has evolved into a refreshing new hybrid of the American musical. This is what West Side Story would be like in the 21st century, but without the gang warfare. Here, the story is a panoramic slice of life that recalls Miranda’s fond childhood memories of his grandmother, Abuela Mundi. Hot days of summer at the local bodega, the fire hydrant flowing and Dominican and Puerto Rican flags flying proudly on windows: that’s what essentially pepper throughout the streets here of In the Heights. The lead character of Usnavi runs the bodego that is the focal point of the show for the various residents that populate the area. His grandmother, Abuela Claudia, plays the lottery and ends up buying a winning ticket worth $96,000 that is the catalyst for the remainder of the show.

In breakthrough performances for both Joseph Morales and Elise Santora playing Usnavi and Abuela Claudia, respectively, the two actors are truly in top form. Especially Morales, his rapid-fire elocution of the rap showdowns are just mesmerizing sights to see. Never would you experience such high moments like this in musical theatre. I’m not talking about the gangsta-thuggish rap you hear bristled by the like of Eminem. No, this is the sound of clever, infectious rhymes as brought to an ear-pleasing melody by the skillful Lin-Manuel Miranda.

Having once lived in Washington Heights myself, I have to say that the sprawling urban recreation of a set design by Anna Louizos was quite impressive. That feeling of deja vu was evident as I was visually taking in the sight of the George Washington Bridge, the unisex hair salons and the corner bodegas. That photorealism was absolute as if that particular street corner was packed up and loaded onto a stage. Also no New York multicultural neighborhood is complete without those sly, urban dance moves. The slick hiphop choreography was created by Andy Blakenbuehler. It made for nifty transitions as the ensemble posed and danced into new scenes.

Director Thomas Kail has effortlessly assembled these various pieces into a thrilling and likable musical that little wonder the show garnered four Tony Awards, including Best Musical. The youthful cast and the Latin-flavored score enrapture you as if you were amongst those residents gossiping and hanging out in the ‘hood. But myself having experienced the real Washington Heights, the actual folks there speak haphazardly accented Spanglish and aren’t as good-looking and athletic as this touring company. But seeing it in dazzling theatrical format, In the Heights is off the hook.

IN THE HEIGHTS @ PPAC, Providence, RI