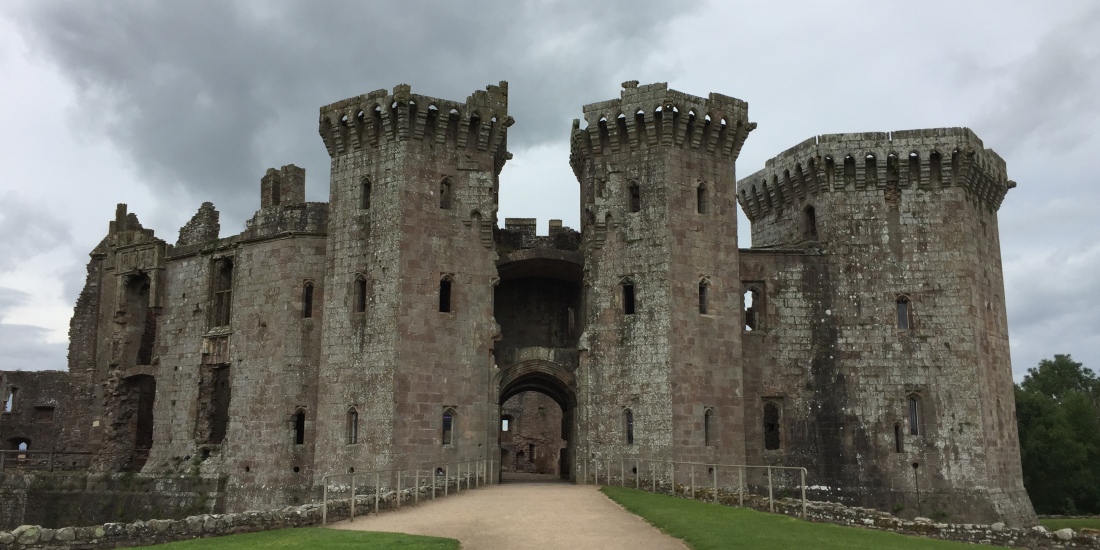 The beautiful ruins beckoned for me to enter this grand castle, name was to be Raglan Castle, potentially threatening, but historically ornate. The imposing towers flanked the raw exterior. Graceful were the entrance arches and the sandy stonework still intact. The unsettling air was becoming agitated as the churning gray clouds were debating whether to spill moisture or not. A royal happening was just getting underway as I arrived. It seemed to be the luxuriously regal residence of Lord William and Lady Anne Herbert.

This was, in fact, a historical re-enactment of the society royal couple going about their airs in the year 1462. Visitors were encouraged to witness and interact with the accomplished troupe of actors in full period dress. It was experiential theatre, Tudor-style, immersed throughout the different zones of the castle. During the segments of the performance, a wide range of willing spectators were pulled into wine tastings with the couple, jostled with peasants in a sword-wielding game, and possibly, traded cultivated insults with the Lord and Lady themselves.

Experiencing this showcase of method royalty in the flesh was thrilling as it removed the artifice usually seen on television shows, such as The Tudors and The Crown. The architectural detail was impeccable as it explored such textured lines embedded deep into the masonry. Looking out from the elevated perches, I was drawn to patterned series of support beams seen along the upper rims of the machicolations. Exploring the grassy moat along the perimeter, more pronounced perspectives often came into my field of vision. One cannot resist the photogenic angles of this glamorous castle.

The current version of Raglan Castle continues to reside within Monmouthshire county in the pastoral village of southern Wales. Its history dates back to the 1400’s when it was built by William ap Thomas for the Earls of Worcester. The castle was not intended as a tower of defense, but rather, an empowering statement of wealth and status.